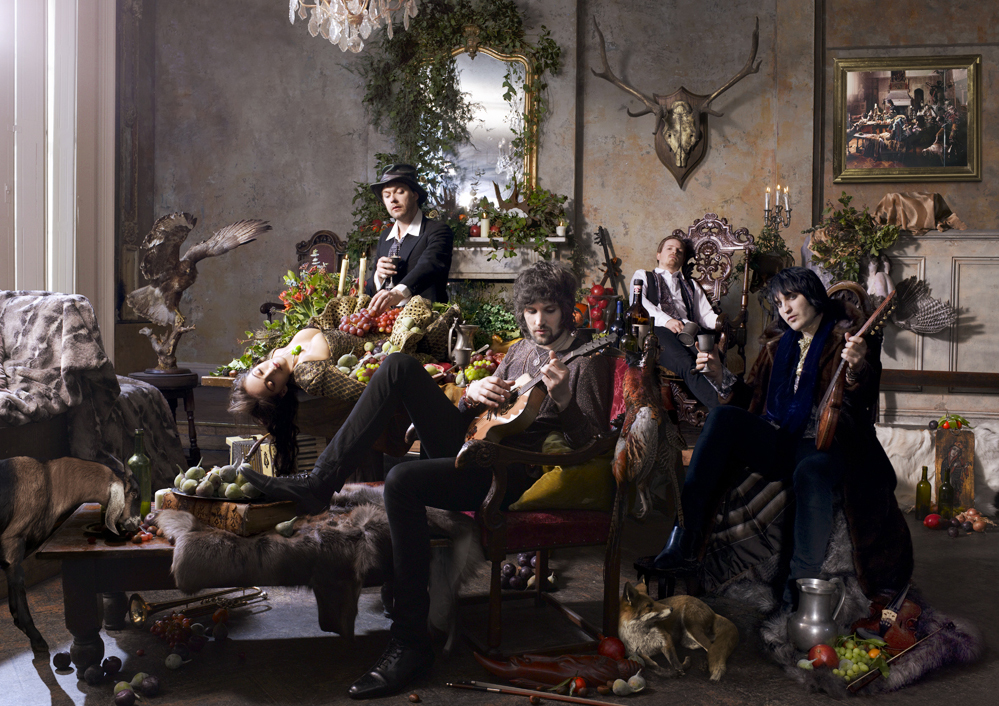 ‘In aid of Teenage Cancer Trust, over 60 musicians have come together for a book that merges iconic portraits with captivating recipes, accompanied by personalised interviews.

A concept created by Patrice De Villiers, with interviews by music journalist Andrew Harrison and recipes by rock ‘n roll cook Sarah Muir, the result is an impressive testament to what can be achieved by goodwill and earnest desire. The project has been supported by 250 companies and individuals all working together for the benefit of others.

From rock legends to emerging artists, an incredible fusion of musicians reveal their passion for tucking into a favourite and often, unexpected culinary desire. Ifyou want to buy the book or the prints please click the link below’.

To buy the prints
http://lovemusiclovefood.moonfruit.com

In this homage to Beggars Banquet Kasabian take the same positions as the Stones. Singer Tom Meighan is an imperious Mick Jagger, guitarist Serge is Keith
Richard (complete with mandolin) and bassist Chris ‘Dibs’ Edwards is Bill Wyman.
Stepping spookily into Brian’s shoes is their good friend Noel Fielding of The Mighty Boosh who—equally spookily—met Kasabian when they played on the same bill as the actual, real Rolling Stones at the Isle of Wight Festival.
Noel had arrived by helicopter (‘the best thing I’ve ever done,’ he says), landing on the lawn of Kasabian’s hotel as the band were drinking Pimms. After bonding over a round of croquet they went to see the Stones, came back, stayed up all night and played croquet again the next day. ‘We weren’t quite as good at it the second time,’ Noel admits.

Pheasant & Oyster Sauce Gyoza with Ponzu Sauce
makes 12–16
2 pheasant breasts, cut into small cubes
4 shiitaki mushrooms, cleaned and quartered
1 garlic clove, peeled and roughly chopped
2cm piece of fresh ginger, peeled and roughly chopped
1 tbsp oyster sauce
1 tsp sesame oil
1 packet gyoza wrappers
2 tbsp vegetable oil
for the ponzu sauce
200ml good-quality soy sauce
juice of 2 limes
For the sauce, in a small bowl, mix together the soy sauce and lime juice and chill in the fridge.
Place the pheasant, mushrooms, garlic, ginger, oyster sauce and sesame oil in a food processor and pulse until smooth.
Lay out two gyoza wrappers at a time and brush lightly with water. Spoon about 1 tsp of the pheasant mixture into the centre of each wrapper, being careful not to overfill. Fold the wrapper over into a half-moon shape and press the edges together to seal.
Heat the vegetable oil in a large frying pan. Gently fry the gyoza parcels in batches for about 3 minutes on each side; they should be golden brown and starting to crisp. Remove from the pan with a slotted spoon and drain on kitchen paper. Serve
immediately, with the ponzu dipping sauce.

Black Pudding & Fig Stuffed Belly of Pork
makes 12–16
1.5kg pork belly, trimmed and scored
25g butter
3 tbsp brown sugar
2 small red onions, peeled and finely sliced
6 figs, quartered
300g good-quality black pudding, diced
1–2 tbsp vegetable oil, plus extra for brushing
sea salt
300ml good-quality cider
Preheat the oven to 200°C/Gas mark 6. Lay the pork belly
on a board. Using a very sharp knife, slice the belly almost in half
horizontally; do not cut the whole way through.
Place the pork belly on a draining rack. Boil a kettle of water and carefully pour over the pork skin to scald it. Dry the pork with kitchen paper and place back on the board.
Melt the butter in a small saucepan. Add the brown sugar and stir until dissolved, then add the onions. Cook gently until soft, about 5 minutes, then add the figs and black pudding. Cook until the mixture is soft and sticky, almost the consistency of marmalade. Remove from the heat and leave to cool.
Heat the oil in a frying pan. When hot, sear the pork on all sides. Remove from the pan and place in a roasting tin. Open the pork belly along the slice made earlier and spoon the black pudding and fig stuffing evenly over the bottom half. Close together and secure with string.
Brush the meat with some more oil and rub liberally with salt. Pour the cider into the bottom of the roasting dish. Roast on the middle shelf of the oven until the juices run clear, about 1 hour, basting the meat with the cooking juices.
To crisp the skin, turn the oven up to 230°C/Gas mark 8 and cook
for about 15 minutes until the pork skin is puffed and crisp.
Cut the meat into chunks rather then slices to serve.

Jacobean Game Soup
makes 4 pints
25g butter
2 rashers streaky bacon, chopped
900g game carcasses and bones
2 celery sticks, chopped
2 carrots, peeled and chopped
2 leeks, washed and chopped
1 onion, peeled and chopped
2 litres chicken stock
1 thyme sprig
1 bay leaf
2 parsley stalks
8 black peppercorns
3 cloves
sea salt and freshly ground black pepper
100ml port
Melt the butter in a large saucepan and fry the bacon for a couple of minutes. Add the game bones and fry gently for 2 minutes. Stir in the celery, carrots, leeks and onion and cook until all the bones and vegetables are well browned.
Stir in the stock, thyme, bay leaf, parsley stalks, peppercorns, cloves and seasoning.
Simmer for 2 hours, skimming regularly to avoid the soup turning cloudy.
Strain the soup into a pan. Strip any meat from the bones before discarding them and add the meat to the soup. Simmer for another 30 minutes.
Stir in the port and serve immediately